The NT Gunner Government have just lifted the moratorium on fracking, allowing gas companies to frack over half of the NT, risking health, water, country and our climate.

What a huge slap in the face. Today the NT Government has betrayed Aboriginal communities and the people of the Northern Territory by siding with the greedy fracking companies and putting our health, future and the climate at risk.

We can’t let them get away with this! Stand with Aboriginal communities who are calling for a permanent Territory-wide ban on fracking by sending the NT Chief Minister, Michael Gunner, a message today. 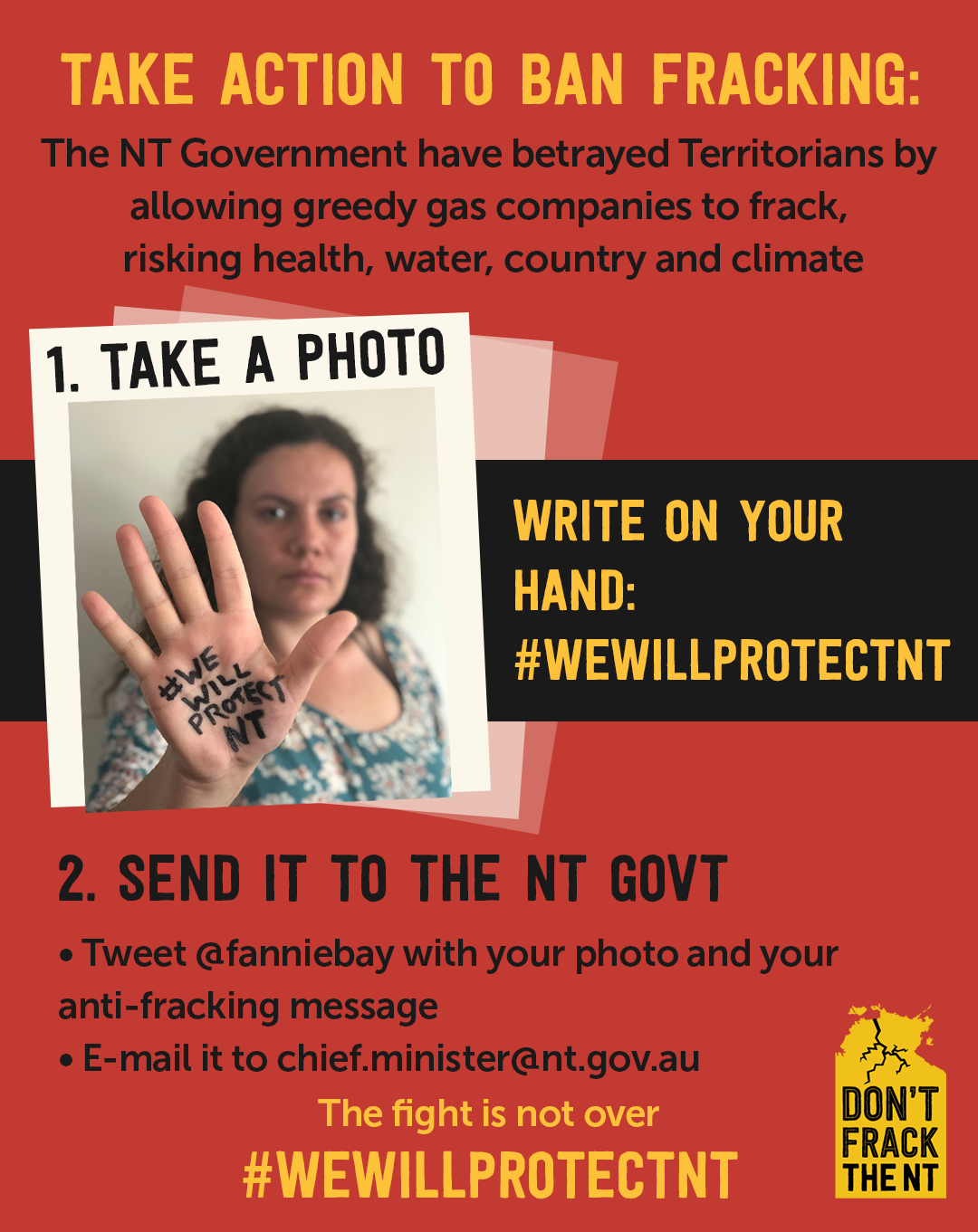 The final report from the NT Fracking Inquiry released just two weeks ago found what we already knew: fracking is risky, especially for Aboriginal communities. In his announcement this morning, Michael Gunner agreed to implement the 135 recommendations made by the inquiry to mitigate these risks, but this is not good enough - no number of regulations will protect precious country, groundwater and our climate from thousands of new gas wells. This is unacceptable and we need your help to ban fracking by taking action today!

Today’s decision shows us that the Gunner Government are willing to risk the health, climate and culture of Aboriginal communities and Territorians who are the most threatened by fracking.

Fracking for gas in the NT will affects us all - the climate impacts of fracking one basin alone is equivalent to 130 new coal burning power stations. But it’s remote and regional communities in the NT will feel this first and worst - heat waves, water shortages and more extreme flooding could force many remote communities off their country, and make large parts of the NT unliveable.

In the coming months there will be a lot of work to do but we know that people powered, community-led movements in Australia and around the world have won state and territory-wide bans on fracking before, like in Victoria where the State Labor Government have banned fracking, so there’s no reason why the NT Government can’t do the same.

Don’t let the NT Government experiment with the lives and future of Aboriginal communities and people of the Northern Territory. We will not stand down until the NT Government bans dangerous gas fracking for good. Stand with us and take action today!

In hope for a future free of fracking,

On behalf of the Seed Mob team,

P.S. Can you chip in to help build our fighting fund so that we can continue to pressure the Gunner government over the coming months?

On Wednesday, courageous Traditional Owners from the Origin Energy fracking permit areas of the Northern Territory travelled all the way from Minyerri to Sydney to challenge gas giant Origin Energy...
Read more